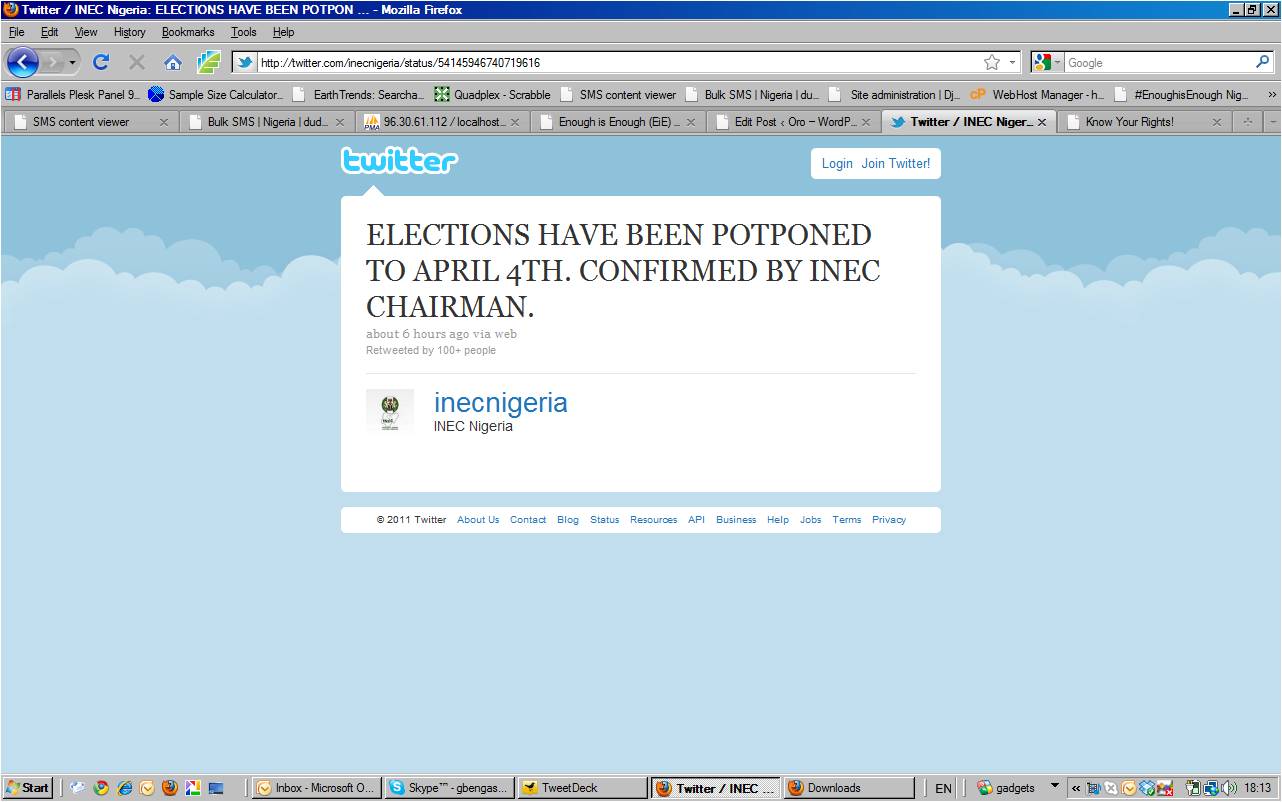 Today should not have happened.

But it did, so there are some important lessons that must not be lost in the honest feedback – and analysis paralysis – that has followed the cancellation of Nigeria’s parliamentary elections. My tweet just after the announcement, “BEST: Smoothly-run + Free and fair. BETTER: Postponed + Free and fair. WORSE: Terribly-run + Not free and not fair. #NigeriaDecides #rsVp”, says exactly how I feel about the unfortunate incident that has cost everyone huge resources – and will still cost more if the election is repeated on Monday as announced by the INEC chairman. INEC should have worked to prevent this or announce a cancellation immediately it was obvious that materials will not be delivered on time.

The first lesson INEC has probably learnt by now is that each election day can be a nightmare, especially with the many moving parts involved. So, why spread this over three weekends? If the Governorship and State Assembly elections are held on the same day, why can’t the Presidential and National Assmebly elections be held on the same day too. It’s something like putting your eggs in two baskets, and not three, so you can spend all your energy guarding the two – instead of having it diluted over three. And just before you say, “it’s the law”, be reminded of the many revisions the Electoral Act has gone through in the past few months. Law is made for man, and not man for the law.

Another lesson is from a question that I’ve not found the bandwidth to push over: why is INEC not using the mobile numbers they got from each voter that registered for the elections. I would have expected INEC to send text messages to everyone today just as the chairman was making that difficult speech. Those who have downloaded EiE Nigeria‘s ReVoDa mobile application have continued to receive updates about the process, and I’m sure some of them saved time on the queues that were headed towards postponement. I must commend the brilliant use of the twitter account, @inecnigeria, during today’s confusion though. It was great to see the account denouncing and confirming rumours as appropriate.

In a nation where the rumor mill is the biggest communication machinery, new media isn’t luxury – it is necessary. But then, how many of us kept twitter a-beeping? SMS wil do the trick. Imagine waking up on election morning to read this: “Dear proud Nigerian voter, today is the D-Day. Please hurry through the bathroom and kitchen, grab a can or two, and head for your polling unit. We assure you that your vote will count. Yours, INEC.” Okay, not exactly those words, but you get the point. 🙂

Another lesson from today would be this: you need ReVoDa. Apologies to those whose phones can’t run the app, but everyone else can avoid becoming victims of the rumour mill. Trust me, there will always be rumours on election day. I was the Chief Rumour Killer at my polling unit today, thanks to the INEC twitter accoount and the many channels that I had the opportunity of being hooked up to. Another lesson that relates directly to ReVoDa is the EiE Nigeria website, EiENigeria.org. A lot of people were trying to get numbers for their State Resident Electoral Commissioners (RECs) today, because of the inability to reach the INEC hotlines, and they could have saved themselves the stress of looking for a vendor to supply a national newspaper that listed the numbers by asking anyone with a connected phone to go to EiE Nigeria’s website. And I’m sure there are many other websites that provide similar information!

So, on Monday (or another day, if the request of two political parties is accepted), it is important for everyone to return to their polling units to exercise their electoral rights. Why? Because those who seek to destroy Nigeria are desperate and we need to be a bit more desperate to beat them. I know there will be some funny bosses who will say you must show up or be fired, but a public holiday will likely be declared if Monday is final. And as of now, please plan for Monday. In fact, if INEC agrees to postpone again, the SMS rule must apply. I know the brilliant minds behind the technology engine know how to make that happen at low cost.

And then, the day’s biggest lesson: Nigerians want to make the elections work! From the brave youth corp members, who accepted to manage a process that has been known to cost human lives in the past, to the young people (and some, not so young) who made sure information flow and logistics support — between citizens and the process — was taken care of; and the many other people who took time to report their experiences — good or bad, via twitter, facebook, SMS, ReVoDa, ReclaimNaija, etc — you can literally cut through the spirit of support. Of course, there are those who would rather shop for what’s not working and those who know how to analyse even the things they would be unable to do, but we need every angle to see the complete picture. To everyone who made today work, in the few ways it did, you have my utmost respect!