#BringBackOurGirls is part of an unfolding citizen action process given expression through hashtags, protests. It builds on earlier actions. When some said #OccupyNigeria was a failure, I was quick to point out the fact that it’s not correct to isolate citizen action as activities.

Before 1999, social mobility in Nigeria was frozen, except for few activists we outsourced protests, concerns to. Many buried heads in sand. With the arrival of democratised communication in the early 2000’s, thanks to mobile telephony, anger found its way through telecom networks. People discussed issues. Poor power supply, terrible roads, miseducation, shameful healthcare. Social mobility found ally in telecom freedom.

Between 2007 and 2009, when social networks began to connect more voices on similar issues, unfreezing of social mobility in Nigeria grew. By 2009, we began to see clear demonstration of anger finding exit through BBM, Facebook, more. Organization for action enjoyed these tools. The 2010 protests, triggered by a sick president and rumour of the cabal, found friends in social media connections. 2011 enjoyed from this.

2011 elections saw citizens using tools like ReVoDa and social media-enabled tools to take action. We labelled them clicktivists but a group that had found exit in silence found tools that allowed the safety of near anonymity while allowing outlets for angry expression. This is why 2012 #OccupyNigeria happened. Not because opposition or a tired labour movement wanted mass action, but anger found expression.

Social media proved useful in amplifying the issues, connecting angry citizens to mutual expression and to even report organised action live. 2013 saw Nigerian citizens standing up for each other through various #SaveCitizen efforts. You think hashtags are useless? Ask victims whose lives were saved because someone cared enough and started a hashtag. These actions are part of a trend, and it’s why it was easy for citizens to join a campaign that had elements of citizen solidarity, demand for good governance and measurable action.

When the first set of #BringBackOurGirls tweets showed up, people could identify with what it represented. Government failed to act and was going to cover up the abduction of #ChibokGirls, as usual. They saw concrete action that challenged citizen helplessness in the face of Boko Haram. #BringBackOurGirls is part of an unfolding series of citizen expression. Citizens respond to leadership that seeks results.

As with many hashtags before it, and many more we’ll see unfold, #BringBackOurGirls isn’t isolated clicktivism, it’s growing citizen action.

CHIBOK GIRLS ARE OUR GIRLS: ASHOKA FELLOWS CALL FOR GOVERNMENT ACCOUNTABILITY AND INTERNATIONAL DAY OF ACTION ON MAY 14TH 2014.

On April 14th, 2014 over 270 girls were kidnapped from Government Girls Secondary School, Chibok, Borno state. Their lives will never be the same.

These girls had resumed briefly, to take their examinations at the school, in a state that has virtually been a war zone for the past five years due to the menace of the group we have come to know as Boko Haram. For almost two weeks, there was deadly silence, until the world began to catch up and speak out, until social media came alive with fury about yet another injustice done to innocent children by the terrorist group in North-Eastern Nigeria.

Why has the government taken so long to respond and why did they let various atrocities against the girls continue unabated before waking from their slumber upon international outcry? In our opinion, there are several reasons for the negligence:
1) Children of the Poor – these girls were characterized as ‘Children of the poor”. A serving senator was quoted as saying ‘only poor people send their children to public school’. Their parents were not senators or ministers, they had no one to speak up for them or offer a huge ransom in exchange for their return.
2) Borno State has been abandoned by the government – although under a state of emergency, daily attacks on the lives of citizens continue unabated with mass killings, kidnappings, rape and other atrocities committed against innocent civilians daily in each of these states. A report by Human Rights Watch in October 2013 described kidnappings of girls and other citizen disappearances. The parents of these girls reported that for weeks after the kidnapping, there was still no presence of any military force on ground.
3) Girls are neglected in Nigeria – girls have less of a chance to go to school and are more likely to be sold in child marriage. UNICEF
4) Education in the North is neglected and poverty is rife – Nigeria has the highest estimated number of our of school children IN THE WORLD – an estimated 8 million. Over half of these are girls.
5) The government has other priorities – becoming an economic super power has been the priority for this government – not caring who is left behind. The Goodluck Jonathon administration has focused on increasing growth rates with no attention to the growing inequalities that exacerbate social strife.

But there are several reasons that we must take note of as we fight for the lives of these innocent young girls whose nightmare over the last few weeks can only be imagined:
1) The brave and courageous – Their parents had taken a chance, a very big chance, first by attempting to school their female children in a region where some states don’t boast of a female literacy rate of over 17% and where less than 8% of female students complete secondary school. Secondly, they had taken an even bigger chance TO SEND THEIR DAUGHTERS TO SCHOOL, knowing that there have been incessant attacks on the schools in the region and that the schools had been closed for some time, only reopening for the exams.
2) The bright and ambitious – These girls were an elite few, they had made it through secondary school, against all odds, and had big dreams for their future, dreams of attending university or a tertiary institution. Some would want to be doctors, lawyers, musicians, scientists and others might even be aspiring to enter into government, to change the plight of the girl child in Nigeria.
3) Child marriage was not their option – they wanted to go to university, to become great people and have different opportunities for their lives. Unlike many girls their age in the same region, they had not been sent off into child marriage but their parents had chosen education as the key to their future.

From this, it is clear that the terrorists who stole the light from these children’s eyes had every intention to break the only hope that remains in this down trodden and forgotten region of the world – the HOPE FOR A BRIGHTER SECURE FUTURE THAT RESPECTS THEIR RIGHTS AS GIRLS AND AS HUMAN BEINGS, BASED IN THE RIGHT TO EDUCATION AND THE RIGHT TO LIFE.

For over three weeks, these girls have be out of school, away from their homes, denied their freedom and subjected to rape, abuse, forced labour and other atrocities which we do not yet know the full extent of. They have no doubt been victims of continuous sexual assault and slavery, homelessness, trafficking, sleepless nights, emotional trauma, fear of being killed, human assault, negligence and deprivation. At the very same time the president, instead of sinking his head in shame focusing on the task of finding the girls, is more interested in hosting the elite capitalists of Africa at the World Economic Forum on Africa, unabashedly dancing and laughing in public, behaving as if a national crisis were not at hand, as if it were not human beings whose lives were being destroyed.

Even as the media has awakened the world’s attention to the atrocity at hand, the fact remains that the girls have not been rescued, and as every day passes by, the chances of their rescue grows dimmer with reports of their trafficking across borders and being sold into the general population. It is at this critical time, that we must arise as a nation and fight for the return of these girls and their reconciliation and rehabilitation. It will be no easy task, but with the whole world watching, it is important that we as Nigerians continue to hold our government accountable and force its awakening from its slumber. It is time that we raise the battle cry, not just against Boko Haram, but the continuing poverty and inequality that continues to haunt us as a nation in the midst of our national wealth and riches. It is time that we arise as compatriots, and obey the call of our ancestors to fight for a nation that should be a great pride and joy to the continent.

We hereby call on the government to
1. TAKE FULL RESPONSIBILITY FOR THE CHIBOK ATROCITY AND ITS DELAYED RESPONSE – it is not the responsibility of any other government and our government MUST BE HELD ACCOUNTABLE and apologize to the families and the world. It must act immediately to salvage what is already a very tragic situation.
2. PURSUE THE RESCUE MISSION WITH MINIMUM USE OF FORCE – many have cried for military bombardment but we as social activists are acutely aware that war and more violence are not the answer and directly threaten the lives of the residents of the state. We ask the government get these girls back with use of MINIMUM USE OF FORCE to avoid casualties and death among the girls and the civilian population of Borno and surrounding states
3. IMMEDIATELY CALL FOR QUESTIONING AND POSSIBLE DISCHARGE of all defense and service chiefs charged to guard the citizens of the state but unable to protect these girls who have not been located for close to a month.
4. IMMEDIATELY CLOSE ALL SCHOOLS IN BORNO AND SURROUNDING STATES until government is able to offer full 24 hour protection with FULL SECURITY to all school children
6. PUT IN PLACE WITH IMMEDIATE EFFECT A TRAUMA SUPPORT CENTRE – where parents and girls that have escaped from the kidnappers can receive support, care and counseling. ALL RETURNED GIRLS must be given immediate access to rape support care and placed on all necessary medications free of charge. This support centre should be fully equipped with appropriate and culturally relevant services and families and victims must receive secure transportation to and from the venue as well as have full protection while accessing services. In addition, families of the victims should be place under protective custody of the state to ensure no reprisal attacks are taken against them.

We call on Nigerians and the world to hear the silent cries of these girls as the weep daily and TO NOT RELENT UNTIL THESE GIRLS ARE BROUGHT HOME AND THE PERPETRATORS BROUGHT TO JUSTICE.

We as Ashoka Fellows in Nigeria represent the community of social entrepreneurs that are committed to social change and Social JUSTICE in the country. We cannot sit by idly and pretend that all is well when the opposite is the case. We want to state that CHIBOK girls are OUR GIRLS. They are not just poor and nameless children. They are our daughters and our sisters. They represent what little light of hope is left in the country. They represent a dream dashed to pieces and we must do all we can to halt this tragedy that is occurring and find some way to reconcile these girls with their homes and families, while giving them the full and necessary support to put the pieces of their broken lives back together. 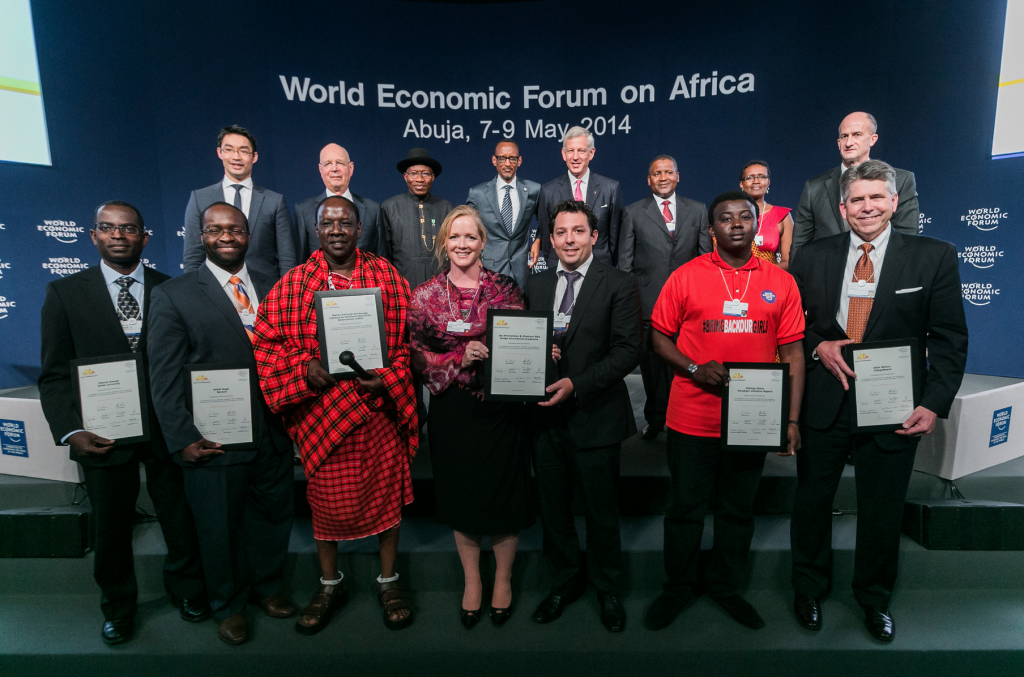