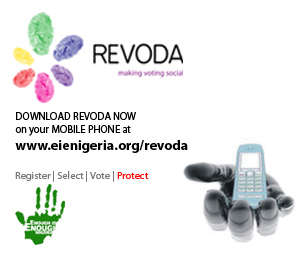 ReVoDa, a new mobile application brought to you by the EnoughisEnough Nigeria coalition, was designed to allow citizens report incidents, results, violence/fraud, police behaviour, INEC staff conduct, etc, from their respective polling units – and from the comfort of their mobile phones. ReVoDa turns eligible voters into informal election observers, and allows monitoring organizations to draw conclusions about the legitimacy and accuracy of the elections. If you’re already familiar with what ReVoDa is, and you just want to start using it, please see the 5 Easy Steps at the end of this blog post.

Since Nigeria’s elections have a history of manipulation and voters are usually disconnected from the process beyond voting in itself, the use of ReVoDa during the 2011 elections will showcase the power of popular participation. ReVoDa, as part of EiE Nigeria’s RSVP campaign, connects voters to the entire process and makes it fun – especially for young voters who’re avid technology users.

ReVoDa provides untrained citizens with a medium through which they can share their objective and subjective election experiences and it potentially turns the 87,297,789 Nigerians with mobile phones, 43,982,200 with internet access and 2,985,680 on Facebook into informal election observers. ReVoDa is easy to use, and comes with a HELP function to guide you. To use ReVoDa, start by registering your name and polling unit number by sending a text message to 08128882011, using this format: PU# Name (e.g. 24/13/02/015 Oluwangozi Danladi). If you’re sending from someone else’s phone, use this format: PU# Name Mobile# (e.g. 24/13/02/015 Oluwangozi Danladi 0800 000 0000). You will get a return SMS confirming your registration and advising you to download the app. You can read more about how it works at http://revoda.org/howitworks.

And here are 5 Easy Steps to take in order to use ReVoDa, courtesy of @EiENigeria:

2) @EiENigeria will send you a text message to confirm your registration, along with a link to download ReVoDa

3) Download and install ReVoDa, and set up your profile information on the ReVoDa mobile app

4) Get familiar with ReVoDa! Feel free to use the HELP menu or check out http://revoda.org/how-it-works

For more information, please contact EiE Nigeria via info@eienigeria.org or 0809 222 2011 or @EiENigeria.

A lot has happened over the last few weeks, especially as actual campaigns begin across Nigeria. Gaffes, reckless statements, assumptions and an unhealthy dose of sycophancy are in unlimited supply as presidential candidates showcase themselves in an attempt to convince as many Nigerians as possible to vote for them. Though a 21-way race, according to the electoral commission, I have only seen a list of 18 presidential candidates. Some are so unpopular that no one seems to know what exactly they look like, but there are those that most people refer to as the leading candidates. I will only speak from available data, leaving the oft-used “man to beat” slogan for the campaigns to claim. 🙂

In a February 2011 online poll I helped coordinate for EnoughisEnough Nigeria, which seems to also mirror the offline choice of Nigerians, the leading candidate is the incumbent, President Goodluck Jonathan. He’s closely followed (39% to 29%) by retired General Buhari. Nuhu Ribadu wasn’t far away at 25%. Others include Pat Utomi, Dele Momodu and Chris Okotie – in that order. I had thought Governor Shekarau would pull some weight.

As if to confirm the poll, another (ongoing) poll asking young Nigerians to choose six leading candidates they want in a presidential debate shows preliminary results that include Jonathan, Ribadu, Buhari, Utomi, Momodu and Okotie. But don’t count on it, Shekarau seems set to pull a surprise. The poll also asked people to choose what topics these candidates should debate, and no one will be surprised that leading issues are power, corruption, education, economy, poverty and security. The poll closes on March 4 and you should please take it at http://eienigeria.org/polls if you haven’t done so.

The poll is a joint effort of a group of over 15 youth organizations that have come together to host a presidential debate at the Yar’Adua Centre in Abuja on March 25. With confirmations from most of the candidates and the duo of Chimamanda Adichie and Ebuka Obi-Uchendu as moderator and host, you can be sure that the group, working with the theme, “What About Us?”, isn’t leaving anything out. You can read more about the network of organizations that includes the EnoughisEnough Nigeria coalition at http://www.whataboutusnigeria.org. The group is actively using social media to promote the debate, and you will notice this in the status messages, profile pictures and tweets of young Nigerians especially on Thursday, March 3.

As the day-count towards the elections dips below 30 from tomorrow, I can literally feel the pressure coming from the need to deliver on all that we have to do – especially technology-wise – in order to make this 2011 opportunity more participatory. During the event that marked the first anniversary of EiE Nigeria on Sunday, I talked about our plans to roll out the web and mobile application that will allow each citizen become an election monitor from the comfort of their mobile phones. Tagged ReVoDa, I’m excited to have worked (directly and indirectly) with @TimAkinbo, @EmekaOkoye, @OoTheNigerian, @MayowaOwolabi, @LekanStephen, @EOlutosin and @Namzo to deliver on the platform that will go live on Tuesday, March 8. Of course, these gentlemen are the real gurus behind the work and it looks like everyone is locked in considering the post-election application of ReVoDa.

As the candidates cause traffic problems and call each other rascals, it is my hope that young people – who make up 70% of the Nigerian population and 65% of the registered electorate – will drive this election towards an issue-based one by asking the question: What about us? We can take this country back, people, so that we don’t have to bury our head in shame while the world asks: what happened to the nation that showed so much promise at independence 50 years ago? We’ve moved around this mountain – of voter apathy – long enough, it’s time to turn northward and take our country back. We’ve got numbers and technology to our advantage, let’s remind office-seekers that each position comes with a social contract!